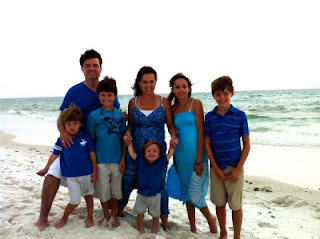 The Go-Gos song rings thru my head whenever I hear the word "vacation" even though the song has nothing to do with the Destin beach kind that we so enjoyed. We've never gone on a REAL vacation since having kids. We've taken the kids to Branson a couple of times, and we all went to Greensboro NC as SBC messengers the summer we celebrated 10 years of marriage. That's it. We had Disney on the horizon 5 years ago, but then came Elijah and that all changed... and then Levi too. Then David ran for office. It just wasn't possible. We finally did it and I am so glad.
We had the best time.
We left at 6am. Got there about 6pm. We were making great time. The drive was going extremely well. I was thinking "why don't we do this more often?" but then toward the end of the drive, right when there was no place to turn into... Levi explodes. His diaper had worked its way into a wedgie so that the elastic was right between his cheeks. There was no hope. Abigail being the oldest of 5 who sat between Levi and Elijah in the way back, calmly said "there is poop on my leg. Levi exploded." She didn't freak out at all. I climbed back there and did the best I could with a package of wipes. But OH MY. It was not enjoyable! We finally made it to the Florida welcome center and everyone felt the need to get cleaned up whether contact was made or not!
Traffic hit us the closer we got, but we were able to avoid most of it by following David's gut. The mid-bay bridge was jammed full, that was the big wait, right when the kids were going crazy wanting to be there. But even with all that... it really wasn't bad. Of course, I brought throwback headphones that blocked out most noise and listened to "The Help" through much of it. If you need an audio book... that one is awesome. The accents the characters had were absolutely perfect. I read that in the book the white ladies don't have a "written" accent like the black ladies do, but in the listening one... they very much have SU thuhn accents. Great great book. Highly recommend!
We got there early enough to throw our suits on and hit the beach. The condo was right on the beach. Elijah was timid. Levi liked to stand on the chairs that we put at the edge. he liked the water to come up on his toes. He would go out without complaint, but he didn't love it. Elijah really didn't want to have much to do with the water. He'd play in the sand and ask to go to the pool. The older three loved it. They boogie boarded and acted like fish thru all that seaweed that wigged me out a bit. The water apparently is filled with seaweed in July. Didn't bother the kids one bit. I still went out (and once you got past the seaweed stuck in the surf, it was clear) and boogie boarded as much as I could, but Levi didn't like it when I left him.
Ron and Kathy came down Monday night through Friday morning. Levi was more tolerant of me leaving him when Papa was there. I got to play more then :) David and I also went to Stinky's all by ourselves one night. That was nice. We usually grilled there at the condo.
It was a great week. I had to clean the place the last day there. I didn't love that. I suppose we did that to save money, I don't know b/c I didn't handle that part. David rented it thru a friend who owns it. I didn't think I'd mind cleaning, but it pretty much sucked up the last day for me, then we had to go out to eat b/c I didn't want to mess the place up. I went out to the beach in the morning, then came in and cleaned the rest of the day. I didn't let anyone go back out in the afternoon like they did all the other days b/c they had to shower after that morning and then not again or I wouldn't be able to clean it. Elijah finally decided he liked the water the last day! We actually took him out in it that morning b/c he threw sand on Levi. I took Levi out to get cleaned up and told David he should take Elijah out too in order to teach him not to do it. He didn't like going at first, but then he loved it! stinker And it was right when I was going in to clean so I missed most of it!
Had to change the sheets before leaving... and when you leave at 6am, that is quite the chore. SO, I know I will never do THAT again no matter how much it saves!
In spite of that, we had a great time. It was nice to get away and not think about redistricting for a week. Maps came out today, but THAT is a separate post :)
Posted by becca at 10:43 PM

So glad you guys were able to go on a family vacation. We love Destin!! And I can't imagine having to clean a condo after a week of my family dragging sand all over the place - you're right - not worth whatever it saved you.

I'm going to start mourning the loss of my favorite neighbors now. :(