David has the pictures from Isaac's party on his phone. Hopefully I'll get those and can upload them. My camera went missing again.
David and the older boys had HuntFest Saturday afternoon-night so Abigail and I took the little boys to the mall. I wanted Elijah to build his first bear with the money he got for Valentine's Day. We went down the row of animals to stuff... he'd pick up one saying he wanted it until he got to the next bin. Then he'd put down what he had and pick that one up saying he wanted it. He totally lost interest in the animals when he reached the sounds. He said he was playing a game and wanted Sissy to play it with him. He didn't know they were sounds you could put IN the animal thank goodness (I'm not a fan of toys that make noise). 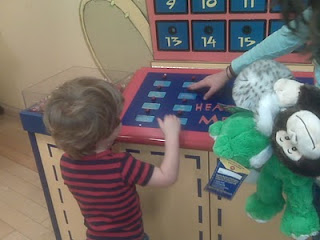 You can see Abigail was trying to get him to pick one. He decided on the Panda eventually. This is him putting the heart inside. 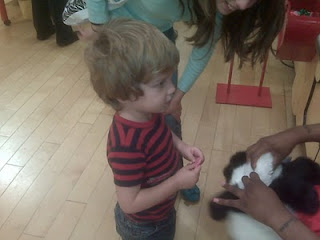 Then he got to step on the pedal to stuff it. 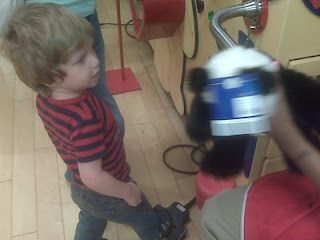 After we stuffed it, we found an outfit. He saw a bin of footballs and said "look, football game." So we got a football player outfit that came with a ball. It took a while to get him to name the panda. I kept asking and he kept saying something I couldn't understand... don't think it was a name. I said "I'm mommy, you're Elijah, what's his name?" He said "Panna." He has a real original name :)
We went to the food court from there. It did NOT go well. I was in line for Mandarin so-called Express. But the line had split and though I had been waiting the longest, everyone kept cutting in front of me. I was gracious for the first two, but since Abigail was trying to keep Elijah from running away in the crowded area, I lost all grace after the 2nd family tried to go in front of me. It was one of those moments that I should have kept my mouth shut and hoped no one I knew saw me. Was not a happy camper and they knew it (they also knew they were cutting in front of me). We left. 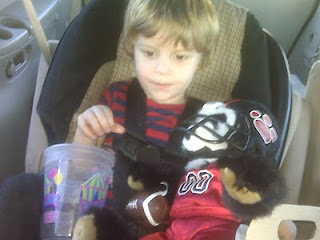 Went to Pei Wei. I had to feed Levi and while in the car I was trying to decide if it was a good idea to go in. I didn't want to get in there and have Elijah throw a fit. He's a very compiant child for the most part, but you never know. When a 2 year old throws a fit, all you can do is leave. This is Levi in the very long line. Thankfully E was just fine. Abigail had some jewel stickers she'd put on his shirt every once in a while. It kept him occupied. 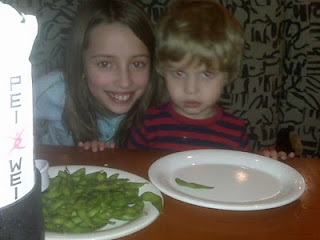 We got him edamame so he could get to eating right away. Abigail is the best big sis ever. 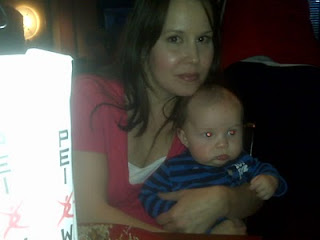 Levi was a champ too. He mostly stayed over my shoulder and flirted with whomever was behind us. 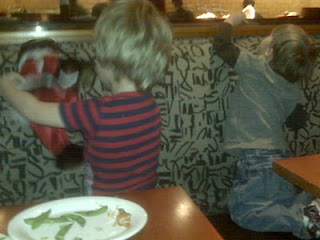 E made a friend and they played. 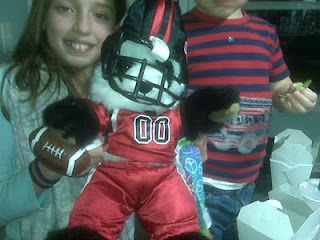 Then we were home and they dug into the leftovers :) See the jewel?
Posted by becca at 10:08 AM

Well, hey! Good to know you're still around. ;) I figured you were just busy right now since you seemed to be doing a lot of Blackberry Facebooking and blogging. I didn't realize you can't comment when reading blogs on the Blackberry. (I don't know these things...I have a wretched hand-me-down flip phone that I can't hear when it rings.)

Anyway, that was cute about Elijah's trip to Build-a-Bear. I think "Panna" is a perfect name!!

I've never understood where people get the gall to be so blatantly rude and unfair! I could NEVER knowingly cut in line, especially in front of a mommy with her children. Seriously. People astound me.