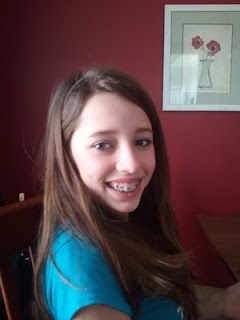 It's been a long week. Tuesday was one of those "Calgon take me away" days, only instead of a hot bath at the end of a very long, cold, and wet day... I got a cold bath instead. It rather summed up the day. Nothing like longing to get away to a hot tub only to be rewarded with tepid water, knowing if you didn't take it anyway, you wouldn't get one at all.

Not worth rehashing the details. Just your typical mom of 5 stuff with one kid having an issue after another and David not being home. Even Abigail... she got a round brush stuck in a big chunk of her hair. Ended up having to cut it out after wasting tons of time trying to get it out (she has so much hair, you can't even tell). 9:00 Mia started meowing non-stop. I knew she was going to have her babies that night, but all I could think of was sleep. I shut her in the office and hoped for the best.

Next morning I went in there and only heard Mia meowing. Didn't see any evidence of kittens. But after she left the office... I saw a lone kitten clinging to the side of a box. It was the "option B" of the birthing choices she had. I had a plastic tub under a table with a sheet folded in it, heater placed far enough away to keep it warm but not blow on it, blanket over part of the table for privacy. She chose the box that 18 rolls of toilet paper was delivered to us from amazon.com 'subscribe and save.' It was up on its side with one flap open... it was this flap the kitten clung to. I heard them after Mia's meowing left the room. So quiet, but definitely letting you know they were there and not happy about being alone. I told Abigail to go get a blanket, took out the old stuff in the box under the table, put a new blanket in the box, and slid the kittens into it. They were so tiny!! Nothing but fur and bones. Mia stood by my side as I fixed them in the new box. She seemed to appreciate it and climbed right in after I finished. She had cleaned up ALL the mess from delivery. I was amazed... and grateful I could toss the box. I had nothing to wash. Even the box was as clean as she could have gotten it.

I read you weren't supposed to hold them until they were a week old. I was going to try to resist. But I couldn't. And then I read that it was good to hold them from the start so they are used to it. Apparently some kittens are jittery and afraid of people b/c they AREN'T held as babes. No worries with these kittens. They've been held by all of us. Even Levi has been in my lap while I've held them. They will be well socialized for a family with kids!

They are fat and round now. Precious rolly polly bellies. Mia is such a good mom... and so tolerant of us. Elijah named them Artie, Belle, and Coconut (or Lightsaber, not sure on that last one). Just asked him for clarification... this time he said "Justin Bieber." ha

Had yet another snow day yesterday. School was let out before it hit. It did hit, but it didn't do much to the roads. Abigail and I went to JCPenney last night. Waiting for it to warm up a bit and then we're all headed out somewhere to look for a storage shed. Our garage is full of campaign stuff. We need a place to put all that stuff.

Supposed to get more tomorrow night and even more Tuesday night. JOY. I already dropped one level 5 piece from the planned CPA music. Even if they say we only have to do 2 instead of the normal 3... I may have to drop the other level 5 piece and do 2 fairly easy ones. All the snow days and all the sick days I had to take :( makes it tough to get stuff learned. But, I'm not giving up yet. I love "Prayer" and want so badly to do it. Will keep moving forward with that piece even if we can't do it at CPA. We can do it at graduation/baccalaureate.