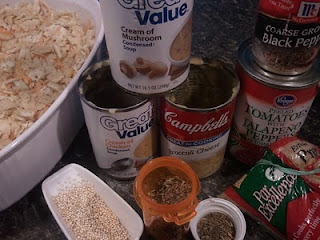 I experimented. I have no idea if this will be any good. A week or so ago I boiled 2 whole chickens for the meat. I'd added salt, pepper and herbes de provence to the water. I like the ease of chicken breasts, but hate the texture and flavor (the lack thereof). I had leftover rice from last night's dinner and a bunch of quinoa I'd cooked in the chicken broth from those whole birds.

So, tonight's dinner consisted of those things. I mixed the rice, chicken, and quinoa together (it filled 2 casserole dishes at this point) then added a can of cream of mushroom, cream of chicken, broccoli and cheese, and a big can of ro tel (store brand) and about a tablespoon of herbes de provence and some salt and pepper. Mixed that all together, added the rice/chicken/quinoa and put it into two casserole dishes. Covered one and put in freezer. Added some grated cheese and crushed saltines to the other, then poured a stick of melted butter over it. Cuz "with enough butter, anything is good" right?

Would be better without so much quinoa. Quinoa is really good for you, but I should probably add it to rice things in a 3 to 1 ratio. It was the other way around in this dish. I had also put some sliced almonds in it to get rid of them. Forgot about that addition. Thought the cheese might be too much, but it wasn't. I'll add more to the other one before cooking it.