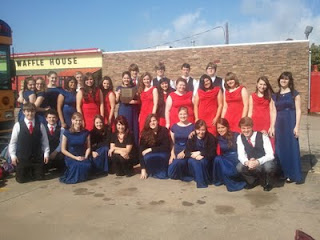 I've been posting pictures intending to return with a story to go with them... but the stories haven't happened until today. Levi woke up at 6:30. Cleaning lady came yesterday. What else am I going to do?

We went to state last Friday. They made a superior rating. So proud of them. I also posted a picture of my seniors. I have such good kids. We went to Waffle House afterwards and sang our a cappella version of "Don't Stop Believin." I recorded the end- battery was almost dead. I was singing along at first so you hear me duh duh duttin above everyone... but only for a few seconds :) (Find the 3 students who were in no mood to do anything silly.... ha)

I thought Levi shoved a piece of sponge up his nose. He'd torn one up... and he is ALWAY putting things in his nose and ears. He was over his ear infection (3 kids had ear infections in a week's time) but started getting all swollen face and drippy. Knew something was up there. Tried to suction it out, didn't work. When he was in the tub last night I kept massaging down on his nose. It'd make him sneeze. Kept trying to hold the other nostril down when he sneezed, but I couldn't get to it fast enough. But it still worked. Saw something sticking out... and it was a not too small piece of apple!!

Also got Mia spayed. Found a place near here that charges $100. Much better than the first place I called that said $350! Glad I dont' have to worry about more kittens. Sweet as they are.

No news on the moving front. Maps won't be finalized til JULY, which will give us 3 months to move... if we have to. Not a great time to be selling a house. But, if there is anyone looking for a larger home in a more affordable neighborhood than chenal... then maybe ours will sell just fine. There aren't many around here the size of ours. Which could also make it more difficult to sell... we shall see.