Thanks to the extended warranty....new tv. Other one blew. 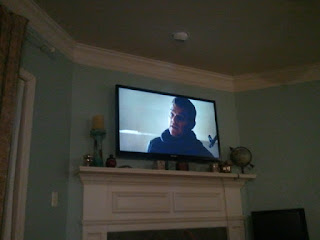 Our TV blew out about 2 weeks ago. One night David was watching it after we'd all gone to bed and it popped. Poof. No TV. We had the extended warranty so we weren't too worried. The Geek Squad came out and determined the screen was cracked (we didn't know, very hard to see the crack) and said that that voided the warranty b/c cracks are caused by impacts. We are feeling very "had" at this point. David insisted there was no impact and wanted to talk to someone else. Dude said he'd write it up as cracked screen-no impact... but he didn't. He wrote it up as impact. The crack started at the edge, behind the frame of the TV. As you can see, it is up above our fireplace. There is no Wii hooked up... no remotes to accidentally go flying... nothing hit the TV. It made a big "boom/pop" kind of sound, and that was that.

David talked to several more people. Called Panasonic... who was helpful, but what did they have to lose? It wasn't their warranty. Finally got somewhere with Best Buy after the Panasonic people told him they could tell if crack was caused by impact if they took the TV apart and looked... so David pushed for that. They eventually decided it wasn't worth the effort and replaced the TV with a comparable model.

And yey for me, I like the comparable model much better. I hate having a massive TV. Only agreed to the first one b/c we got such a good deal. This one looks slightly less obnoxious with the smaller frame and since it is thinner, it is closer to the wall.