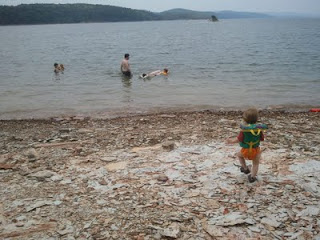 We had so much fun at the lake yesterday! When David told me a fellow state rep (Bruce Westerman) invited us to spend the day with their fam at the lake, then their house for dinner, then fireworks that night... I thought they were crazy. No one invites us to spend a FULL DAY with them. I mean, there are SEVEN of us. And for most folks, that is a lot to take on. But when David said they had 4 kids of their own, I thought "well, they know what they are in for..." and then he said they had a 15 year old boy, 12 year old girl, 10 year old boy, and 9 year old boy. Not positive I got all those ages *exactly* right, but three of their kids matched my older three: it would be fun for them and I figured I could deal. To my surprise, it was a fairly relaxing day. We beached at a little area that E swam in like a fish. He's yet to do that. He's fairly scared when we're at the pool. Will not go in alone and fights going in with someone... wearing a lifejacket. He was convinced there were sharks in the lake and even said he would die at the lake. Did not want to go. Levi doesn't like the kiddie pool. Not even the one in our backyard. And then there is napping...

Elijah swam all over the place (in a lifejacket of course). By himself. Happy as a lark swimming along the shore. Didn't care to go in the boat. I'm sure he would have but since he was having so much fun, I figured we'd not chance it... and there were plenty of kids wanting to go in the boat. Levi LOVED the boat. He even fell asleep riding around in it. So the older three tubed. David was on the boat most of the time with Levi. Levi was in the water with me some, but was great. We had wonderful grilled burgers. They both fell asleep when riding back to their house. The tough time came when they woke up before dinner (shishkabobs and twice baked potatoes- my fave) and then waiting to leave for fireworks. It wasn't too bad though.

We left for the Balboa fireworks early hoping they'd fall asleep again... but nope. They were fine though. Levi didn't love them, but didnt' cry. He'd clap for them when everyone else did, but he still wasn't so sure he should be excited about it. Elijah loved them... and of course the others did too.

Didn't get home til after 11. Levi didn't fall asleep in the car either... but unlike last year... didn't cry at all. He watched Hi-5 DVDs with tired eyes.

I told David on the way home how much fun I had and how surprised I was it went as well as it did. But I told him the TRUE test of how well it went was what THEY thought. Ha And unfortunately, an extended invitation to our house would not be nearly as exciting. They have a boat, lake, and live out in the country with cows and chickens. We have a house with a small yard and an 18 inch plastic kiddie pool. 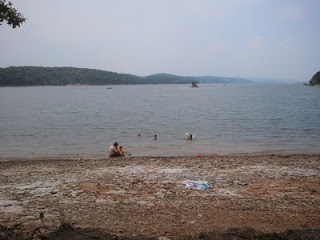 This pic was taken the night before at David's parents house. 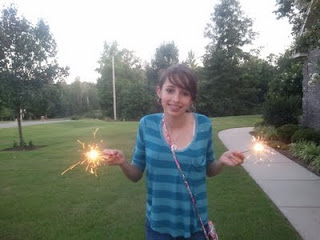 Ain't she purty?
David's brother and fam came up for the weekend. They stayed with us Saturday night and his parents Sunday night. Always good to have them here. Just wish they lived here!
Sunday David and I sang a song I'd never heard but liked. I didn't like it at first... but it grew on me :) Our friend videoed on his iphone. Not my best... totally oversang the congregational songs before this one :)
Posted by becca at 2:24 PM

Great job on that song. The end totally gave me chills!

I'm so glad you guys had a great time at the lake! Your sweet girl is so pretty. She's growing up!!

Trying to listen to the song but it won't come up on my phone and my speakers on my computer are broke - will keep trying though. :)