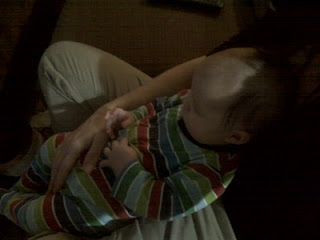 Today we went to the Capitol for John Boozman's announcement. We got to know John during his brother's campaign in '98 (David was Fay's press secretary). When Isaac was 2 months old we went to DC. He met us there (He was a US Rep then too) and personally gave us a tour of the Capitol Building. We got to see areas that weren't open to the public- including where Abraham Lincoln is buried which was particularly neat for me since he's my cuz! He was such a nice man- and so understanding of my kids (Abigail had just turned 3, Noah was 20 mos).
We then went to Lake Norrell. David had to meet a few people. It was a nice drive until my car started to overheat. Guess it didn't like all the hills and speeding/slowing down thru the gravel roads. Must take it in next week. It is a bit of a problem when it is the only car your family fits in, but I can do it when my mom is here.
I have no working computer in this house. Now is the time to find great deals and I need a new coat :( The kids have managed to download viruses on my laptop (which was already old, falling apart, and had no memory... Sounds like me! Ha) and the desktop.
Sent via BlackBerry by AT&T
Posted by becca at 8:37 PM