Abigail, her friend Hannah, and David are on their way to the Justin Bieber concert. Her friend got tickets for her birthday and invited Abigail. I volunteered David to take them :) He'll be in the parent room... they issue arm bands to the kids and the parent and have security that will check them. They spent all day getting ready :) 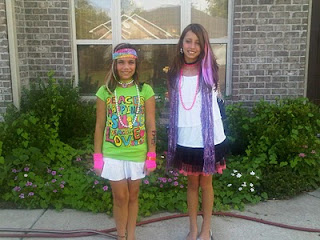 They went to Claire's and got jewelry and hair extensions 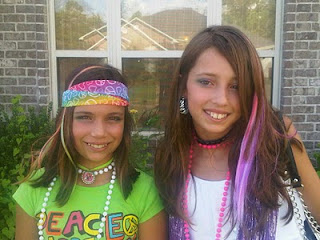 and I did rainbow eye make up. (picture taken before I put the extension on the other side...) 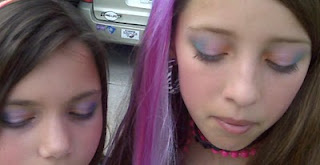 I'm sure they will have the time of their life... and David will be grateful he has an iphone. I told him to download a movie to watch.

levi... I had a bit of a panic... but I knew something else would come up and it did! Got a call that my neighbor's sis in law was taking a different job. I was crushed at first b/c I was soooooooo excited, but I understood. She said she could still watch him Th-F. I asked one of the nursery workers at church if she would be willing to watch him M-W. She said we'd talk, but that it should work. That was great news b/c Levi knows and LOVES her. He actually pushes away from me to get to her when I'm dropping him off. He is going thru a phase where he doesn't want to leave my sight, but will still reach for her. I know she will love on him the entire time he is with her. If he wasn't already spoiled, I'd worry that she'd spoil him :) Then I ran into a former student at Target. I asked her what she was up to and she said was working at Starbucks... but would be working at church if they ever extend their mother's day out hours. So I thought I'd ask her if she was interested in Th-F. She was excited about it and said YES right away. MUCH relief. It has been an up and down whirlwind, but I think I can finally feel settled :)
I'm back to being excited about school starting!
Noah spent a couple nights with David's parents. Abigail spent the night with a friend the other night. Elijah said he "lost them." It was so pathetic and cute. He was dejected and said "I lost them, they're not here."
Posted by becca at 5:23 PM

I am so thankful that you found someone else to watch L. I felt terrible about it. God worked it all out...huge answer to prayer!! He is good! :)

Wow! The girls look like they had a blast shopping and getting ready. Hope they had a fun time.