That's what we've been in. It has been crazy. I knew it would be. I remember what it was like when David was Fay Boozman's press secretary... there was always something he had to go to. Only then we had no children and I'd either go with him or enjoy an evening in all by myself (which didn't bother me one bit). NOW I can't go with him and I am far from being all by myself. And to make things worse... our dining room table has become the meeting spot after hours. David got home last night at 9pm and some guys came over at 9:30. It is the attempting to keep everything clean that is stressing me out. Levi fusses in the evenings... he is awake from 4 or 5 until he goes to sleep for good at 9 or 10. Makes getting dinner on the table and then cleaning up almost impossible. I managed last night, but not without getting ultra frustrated. (and no matter what people say... they do NOT understand a messy house even if you are alone with 5 kids... not unless they are another momma who has BTDT).
That part will get better when they have a campaign office. I like David being here even if he is working, but I can't keep doing this... I know that! I need to be able to do as little as possible at night and save it for the morning when Levi is happy.
I went to the store yesterday for the first time in I don't know how long... I took a chance b/c I left my sling at home. I'd gone to church to work out... and really should have taken a picture of myself b/c I can't believe I went to church like that to work out... let alone wal mart. But I was desperate, and I did... and I don't have clothes that fit... I was there for almost 2 hours. Levi stayed asleep and Elijah stayed happy (and his happiness had NOTHING to do with the bag of iced donuts I opened for him as soon as we got there... and he did NOT find a hole where he could drop a donut and leave a trail... Oh, and I did NOT ram right into a guy's cart b/c I couldn't see any part of it beyond this massive thing I was pushing) 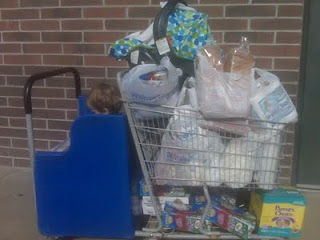 Strategic packing made it all fit. Elijah rode around the store with milk, wipes, and diapers next to him too. When the diapers got left behind at one point, he got upset and pointed... and there they were, in the middle of the aisle about 20 feet back. I'm glad he was so fond of them b/c I needed them.
Got home and put away the frozen food. Levi was up and HUNGRY. The rest waited. Got Elijah down for a nap later than I'd wanted. I thought I'd pick the kids up in the carline, but that didn't happen... so I thought I'd have to hunt them down in extended care. They tend to be who knows where... but thankfully were all outside. The workers saw me pull up and called for them, I didn't even have to get out! I'd showered while L and E napped so I was glad. Not even sure my hair was dry. BUT THEN Isaac never returned after getting his backpack. I sent Abigail to find him, she came back without him. So I HAD to get out... and walk all over the church... no make up, frizzy hair... FUN... oh and the angry look on my face made me look all that much better. Went back to the car and Isaac was there... he'd gone to his dad's office, forgetting he no longer works there. He didn't realize it was ME who was there to get him. Took 25 min to pick up the kids.
After my horrible evening (I realize I'm leaving those details out... dinner, hungry kids, hungry baby, boys fighting over milk and of COURSE flinging it all over the kitchen in the process...), I had an even worse night. Levi has been sleeping 5 hours for that first shift. Last night he went down at 9 (I went at 10), so I figured he'd sleep til 2 before getting hungry. David woke me a bit before 1 telling me Noah was sick. OH FUN. Cleaned up that joyful mess and went back to bed. Then the alarm went off. I figured it was 'false alarm' but it kept going off... I went out in the hall to see David coming up the stairs... he said the back door blew open. He'd put Riddle in the garage and forgot to lock it. So we get a call from the alarm folks asking us for our 'word.' We couldn't remember what it was... so the police came. Went to bed again after all that... and right on time, 2am... Levi woke up. After he ate, it was time to clean up round 2 of Noah. It was a fun night. More cleaning this morning and trying to keep E away from Noah even though E got the bug on Thursday (that was a fun day too let me tell you... with David deciding to be campaign manager... the craziness began... but I won't go back that far :)
I would join calgon right now and relax, but I can't. Typing this as fast as I can and then doing laundry.
BUT first, I have to share how sweet Levi was as baby Jesus... and how sweetly Isaac sang a solo in the church musical. David was Joseph and I was Mary. Sunday was a crazy day as well b/c the school choir concert was that afternoon. My elementary choir sang (and did SO well :) I was trying to feed Levi at just the right times so he'd be happy that night. It was tough with so much going on, but it all worked out and he was happy as can be. He was up there cooing away, smiling, and I promise he was trying to talk :) Isaac didn't know he was going to be singing a solo until the Sunday before, so he had to learn it quickly. He did great. He has the strongest voice for a little 7 year old. No shocker b/c the child is LOUD even when he thinks he is using his 'inside voice.' He can project. Next year I will have all three in my honor choir at school.
Vote for Stanley Reed May 18 :)
Posted by becca at 12:17 PM

Bless your heart!! I'm learning how to manage one - don't see how you do it with five. Hope your week gets better. :)

I wish I could hear your kiddos sing!! I think they should carol the neighborhood this year!! :)

I'm so sorry. I totally understand, though. I've been there with the whole "Dinner: Impossible" thing!! I can't imagine the pressure of having non-family members coming over in the evenings, too!! Hang in there!

I hope no one else has had "the bug." Yuck!! That's the worst--cleaning pukey messes.

That's crazy your door just blew open! One thing, though, about y'all's little alarm incident. It prompted Paul to ask me, "What IS our word??" Ha!