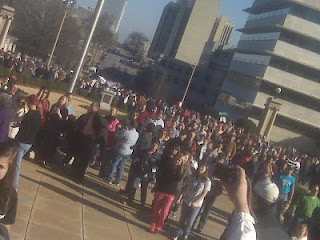 Today has been a busy one. We did not go to church bc David's brother (a photographer) was able to come up to take pictures. Today was the only day we could do it. David needs to have his information cards made. As you can imagine, taking a photo of a family of 7 is difficult. Mark did a great job though.
From there we went downtown to march to the Capitol for the Right to Life. It was a beautiful day so turnout was great. E had not napped- he was very tired. He was in a stroller, but not up for waiting thru the speakers. Levi also got hungry. David and Noah were way up by the podium. The rest of us stopped below bc of the stairs. I was afraid I was trapped but we made it out of the crowd and over to the side where I could sit and feed Levi.
We saw the Duggars there. We passed I think all of them (saw the grandbaby), they were on the side cheering everyone on. Then Jim Bob was up on the steps afterwards. I wanted to have a picture taken with him- he knows David bc he read his columns in the NW Ark Times. He was being interviewed by someone though. Abigail wanted to go meet the daughters.
We were home for less than an hour then left for church. We're doing some fun family nights so I got to play volleyball :). I've missed it.
Sent via BlackBerry by AT&T
Posted by becca at 8:31 PM

I have YET to be able to attend one of the marches. Always been unwilling to take kids during nap time. You're braver than I. But sounds like you all survived just fine. :)

Oh, Paul said to tell you that we'd be happy to help in ANY way with David's campaign. (In other words, my politics-loving husband is itching to get involved.) Seriously, we would!! We still need to get together, by the way.